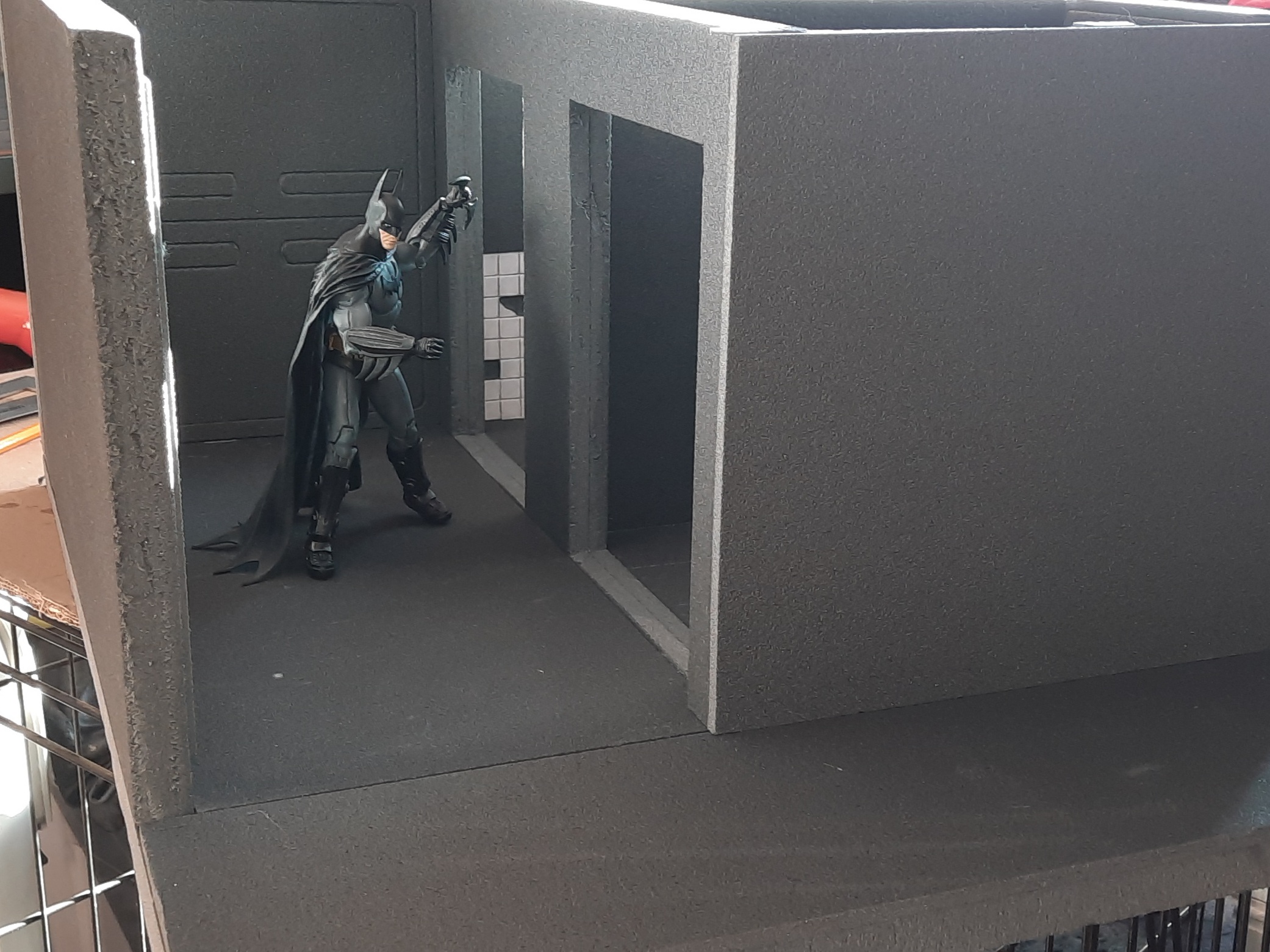 I am starting work on a personal project, something I have wanted to do for quite a while but have never gotten around to doing. I am going to do build an Arkham Asylum diorama, drawing inspiration from the 2009 Arkham Asylum video game. My idea is to build 2 cells with an adjoining corridor.

I am starting with the first cell, this one will be stylised for the Riddler. Sorry, his figure has not arrived yet so, for now, Mr J is modelling for you. The measurements for the cell is 10″ (h) x 10″ (d) x 8″ (w) and another cell will be the same dimensions. I have cut 3 pieces of 6mm foam board to the dimensions I’ve mentioned (these will later be stuck onto thicker pieces of foam). For the tiles, I have used a piece of card and glued it onto the foam. If this does not work then I’ll just cut another couple of pieces of foam.

I’ve spent today cutting foam and working out the overall layout of this piece. Glueing the two 6mm cell floors that I cut earlier onto a base of 20mm foam board, then adding a longer piece of 6mm foam board as the corridor floor. Glueing the wall pieces onto the outer walls and finishing for the day by cutting out the wall between the two cells. The next step is the cut the wall which will house the cells doors and the sidewall for the second cell.

I have finished cutting the two final walls and added an extra layer at the back of the corridor. My next step is to cut the cell doors, which (due to the scale of this piece) will be just larger than the Arkham 7″ figures and not the size that they are in the game.

I’ve been doing a little more work on the Asylum piece. I’ve added brickwork to the right wall of Two Faces cell, tile work to both cell floors. I’ve started to etch out a security door to the end of the corridor and cut out the two cell doors.

After another week with the office, I found time to do a bit more structural work with this piece. I have added what will be two cell doors that can be found within the game. I had added another layer of 6 mm foam to the floor outside of the cellblock, raising the floor to match the level of the floor. An extra layer of 6 mm foam was added to the front wall to hide the join between the cell doors and the front-facing wall.