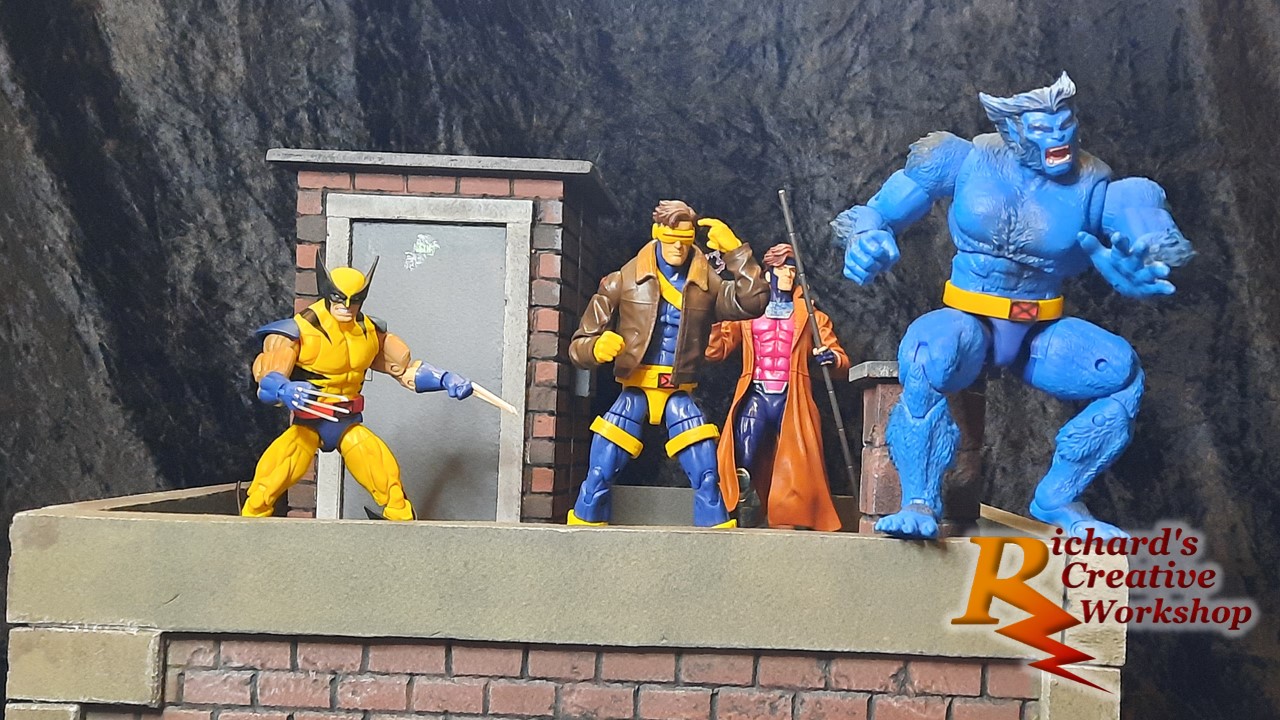 I have been commissioned to build another rooftop diorama to the measurements of 14″ x 12″ x 15″ to fit into clients deltof cabinet for 6″ and 7″ figures.

I have cut the four side pieces (2 pieces at 14″ x 6″ & 2 pieces at 12″ x 6″) of 10″ insulation foam with another four pieces of this time 6″ foam to which were glued onto the first four. I cut notches into the two larger walls, added magnetic tape, and added the side pieces. Notches were cut into the inner pieces and a roof piece cut giving me the basic shape to work on.

I’ve added the brickwork to the walls of the first rooftop, as I have previously each of the bricks are measured 1″ x 0.5″ by drawing on the bricks with a pencil and then scoring around them. Now with that finished it is time to cut out the cornerstones to mask the magnetic tape.

I have cut 24 2″×1″ pieces and 24 1″x1″ pieces to use for the cornerstones and have glued them onto the corners of the building, which masks the gaps and hides the magnetic tape.

I have cut 4 strips of 30 mm foamboard of 1.5″ in height and various lengths for the ledge of the rooftop. Each piece has been glued to a wall panel, which then creates a slot for the roof tile to slot into.

All I need to do is add a second underlayer of foam for the roofs and add tile patterns to each before making the top buildings.

I’ve added another layer of foam to the underneath of the roof and carved slabs into the roof. I then made the rooftop building, which will leave free-standing for my client to a place where they would like to suit his deltof. The size of the building is 5″ x 7.5″ x 4″, it has a single piece with a static door and frame. I have added the brickwork, a doorframe to the front piece and roof.

I’ve added a brick chimney for this rooftop and cut half an inch off the rooftop, which completes the build phase. This evening I’m planning on getting the first layer of brick paint done.

The rooftop is now drying in the sun of a new day after being sprayed with matt black paint.

Let the painting commence! For the brickwork of this piece, I have sponged on a red/brown paint mix. Once that had dried, I have airbrushed cement paint over the cornerstones and rooftop ledge.

I airbrushed cement to the inside of the rooftop ledge. After it had dried, I applied the 2nd coat of paint to the brick, which also covered up any overspray from the airbrush. Using I brown wash, I coated the cement cornerstones and ledge and then painted random brick on both models with the wash.

The next steps will be to paint the floors and roofs before adding a dark wash to the grey cornerstones and ledge.

I’m now on the last leg of painting this piece! I have dry brushed each of the four walls of the building and chimney using a light grey. I have painted the door with magnolia which will be washed down or painted over (not sure right now) and then painted the roofs by sponging on a light grey and while the paint was still wet, I sponged on a dark grey and then left to dry in the afternoon’s sun.

The final touches for painting will be finishing off both the smaller building and adding electrical boxes to complete the builds and begin the next rooftop.

I’ve completed both the top building of this diorama, completing this build. Just need to take my final pictures of this model and then it will be ready to ship.