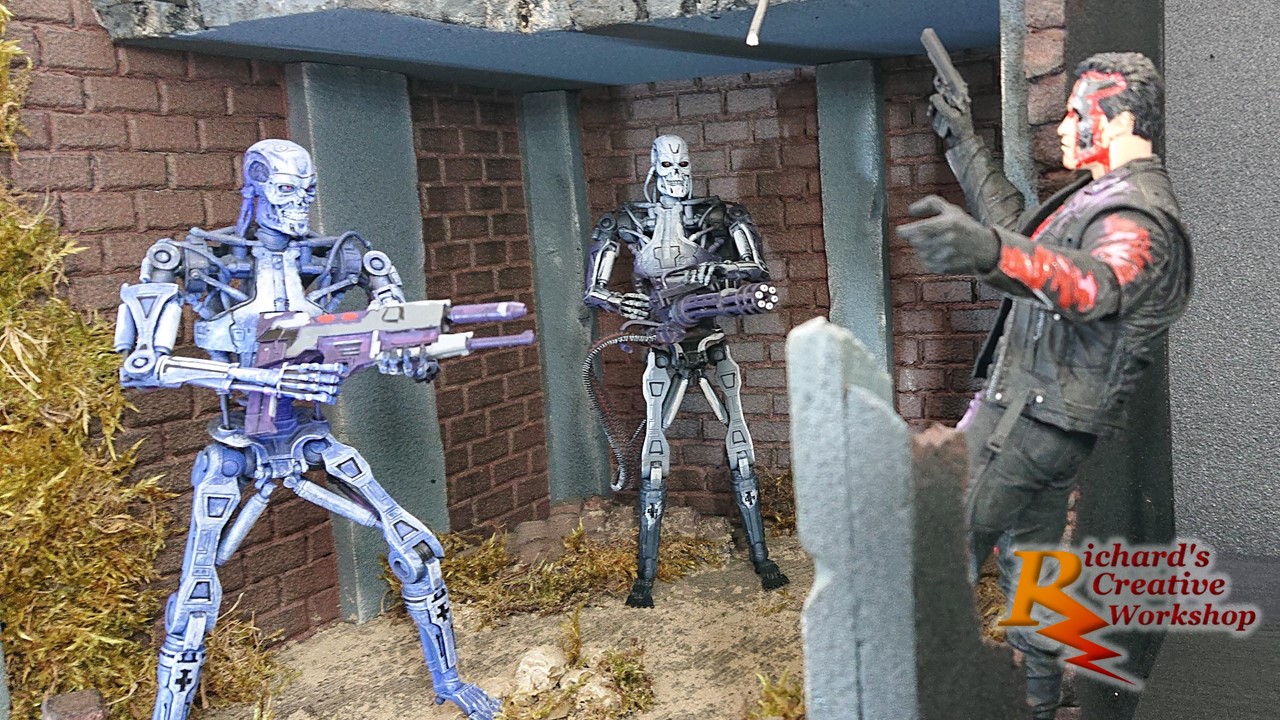 I have started working on a new piece, a two tier demolished warehouse.

Measurements are 15×12″x12″. At the moment I’m going for single skin walls of 10mm thickness. To get the demolished look, I am constructing the model as a whole before breaking it down.

I have drawn on the bricks and made a floor, yes I know the first floor doesn’t look right but it will! I’ve used PVA glue so I am leaving this to dry before moving on.

I started today with scoring the brickwork, when finished I broke down areas of the model to look partially demolished.

The first floor I etched 2″x2″ slabs along with chips, cracks and fractures. The ground floor I cut out single bricks and glued them into piles. I then covered both surfaces with filler mixed with sand. After it had dried I painted the first floor with grey and then dry brushed with Venice Grey.

While that was drying, I undercoated the walls with black, then painted the brickwork, including on the floor. The space above the brickwork has been painted with Venice Grey.

The small wall (which I’m undecided over) was undercoated with black, base coated with grey and then dry brushed with Venice grey.

When the ground floor dried it was first dry brushed with a sand brown and then a dark brown.

When this all dried, it marked the bulk of the painting is done. I glued five pieces together and started working on the accessories. To begin with, I have started to add moss to areas of this diorama. Before adding any more I need to add other accessories.

To give this an apocalyptic feel other than adding Terminators to diorama. I have casted skulls, painted them and the glued them to the floor. I’ve added more moss to the floor, in between the skulls and rubble and then added a layer of sand over it all.

I finished work on this piece. I’ve added I window frames, glued in pieces of perspex as broken glass within the frames and randomly on the floor around the windows. I have also added pieces of metal wire sticking out of the concrete floor.

The window frames were first stained with tea and then glazed over using Games Workshop’s Agrax Earthshade.

To finish off I have sprayed the outside with black, hence the outdoors pictures.