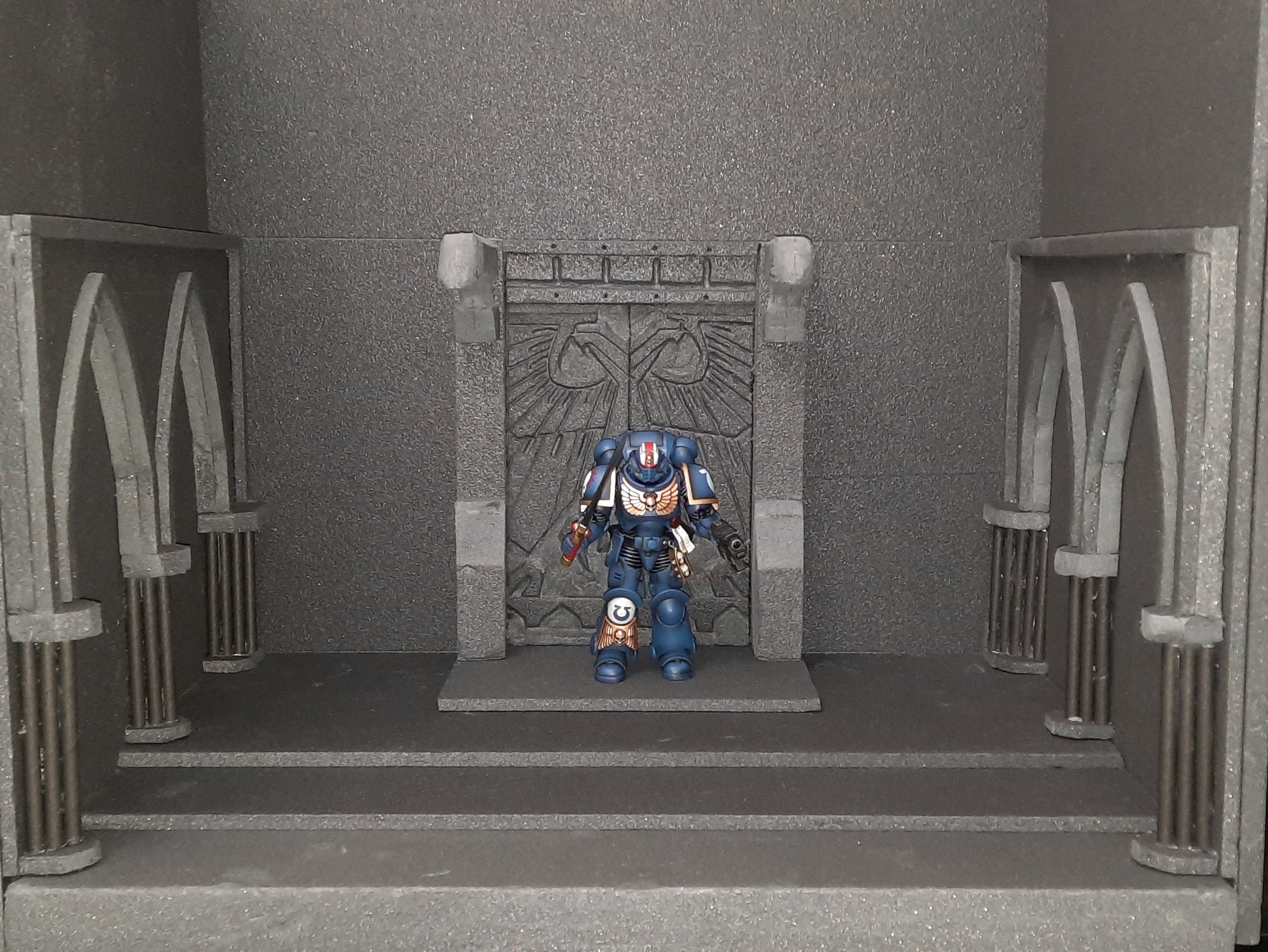 I’m starting a new diorama which will be mainly aimed at my JoyToy Warhammer 40K but scaled enough to accommodate 6/7″ figures. The idea is for a ruined gothic-style building.

It will measure 18″ x 17″ x 12″, made out of foam board, held together with magnetic tape and designed to be flat packed for shipping and storage.

Since I first started painting Warhammer 40K, I have wanted to make a diorama for them. I was going to start one last year for the McFarlane 7″ figures but that project never started and just remained an idea. Now I have a number of JoyToy 1:18 scale Ultramarines, the idea has now begun to take form. The idea is to create a gothic (possible ruin/battle damaged to stay within 40K) inspired structure, which could also be used for 6″ – 7″ figures.

I started with using a piece of 1.25″ piece of foam board for the base and then cut four pieces of 6mm & 10mm thick boards to the size of 11.5″ & 17″, then a back piece (again using 6mm & 10mm board) of 11″ x 17″. Once cut the pieces were glued together and magnetic applied to hold the sides to the base. At the time of this writing, I have only ct out 2 steps and glued them onto the base but another two steps will be added.

I’ve started working on the side walls, cutting out two arches from a piece of 10mm foam board and then cutting two borders for each of the arches using a 6mm board. The pillars are made from cardboard straws, with all the pieces cut and sanded they were glued to the wall.

The next step is to repeat this process on the opposite wall and then start work on the back wall.

I have created the arches and columns for the opposite wall. My next step is to work on the back wall.

I’ve decided to place a central doorway on the back wall. After researching Warhammer 40K architecture I settled for the large double door with the sign of the Aquila engraved on the double doors. I hand drew half of the Aquila on one door and then traced it onto the other door, after it was drawn onto both doors I then gave it some depth. The doors were then glued onto a piece of 6 mm foam board, and then two 1″ thick pillars were glued to either side of the door as a frame, to complete the door frame a piece of 10 mm board was glued over the top of the door to complete the door frame. To complete the top of the frame I etched in a bit of detail, the sides of the doorframe still need to have detail etched into them. To complete the look of the door, I created a pair of gargoyle beaks upon which the upcoming floor will rest. To finish, the door sits on a step measuring the width of the door.